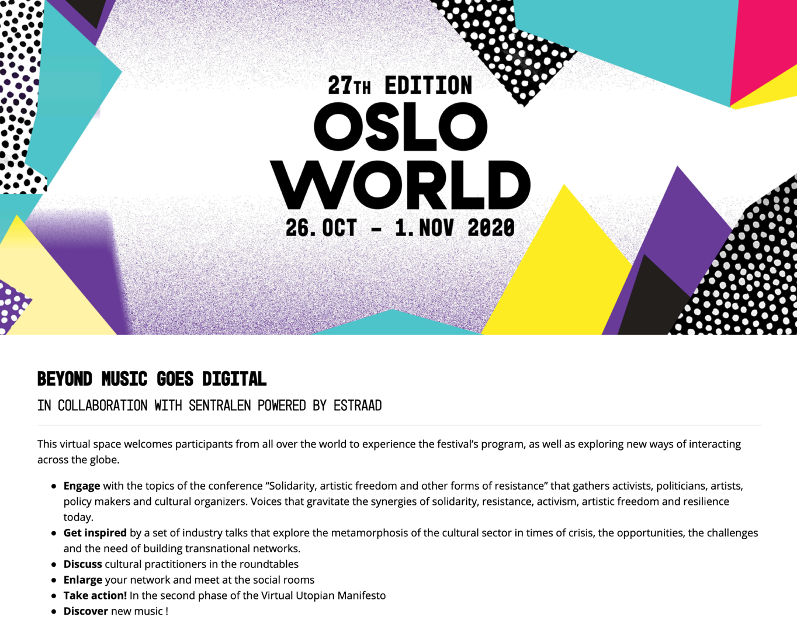 In mid 2020 we started working together with Oslo World to create a virtual solution for the ambitious program of Oslo World. Oslo World can best be described as a dynamic mix of a conference and a festival. Featuring keynote presentations from speakers from all over the world, panel discussions, and industry talks, the programme provides a wealth of information and deep exchange of the participants.Cultural elements like an art exhibition and concerts lend a festival vibe to the programme and encouraged people to connect. Overall, the main goal of the event was getting people from all over the world together to connect, inspire and support each other in making the world a slightly better place.

The international workshops, however, were the part of the program that challenged and intrigued us most:

The utopian manifesto workshops are usually physical workshops where people gather in smaller groups to discuss some of the most worrying subjects of our time and make suggestions for problem solving. To allow for a meaningful workshop, we wanted to make sure that people could work in flexible groups and could utilise discussion tools like workshop boards. Also, with Oslo World being international by default, it was of utmost importance to us to make it possible for people from all over the world to engage in the workshops. Language barriers and latency had to be reduced to a minimum in order to reach this goal.

We knew flexibility was key, so to set out we created a website for the event that enabled us to add different type of content in lockstep with the necessities imposed by the changing regulations.

This proved to be a good decision.While in the beginning all concerts and keynotes were supposed to happen in the physical world with a larger physical audience, the local restrictions changed in the beginning of the week making a physical presence impossible. Given the flexible system we could easily add both, concerts and keynotes, to the website. This also allowed a larger audience access to the content that couldn’t attend the live sessions due to time differences.

To facilitate the workshops, we designed rooms containing multiple project boards for different subjects. The boards were designed in close collaboration with the workshop facilitators to support the development of discussions and encourage a structured outcome of the sessions. Having no constraints in space allowed us to create separate rooms for sessions in multiple languages, leading to 19 rooms in different languages in total.

The workshops were run with twelve to fifteen participants and one main facilitator. While the facilitators were there to guide the overall sessions, it was up to the participants to get together, have proper discussions and work through the content. People naturally organised in smaller groups of three to four to work through the different subjects. Due to the spatial audio, the groups could work and discuss undisturbed by each other, yet easily connect with the other groups, exchange thoughts, or remix the groups. The facilitators could stay in the background while monitoring the different groups and remain accessible for everyone - just like in a physical setting.

The workshops demonstrated clearly the potential provided by a workshop space that allowed for natural interaction and connection of multiple people. The possibility to move seamlessly from group to group and switch from one to one to group conversations whilst having the consistency of a shared reference space made for a natural and efficient workshop development. Further, the rooms and the content remained available after the actual workshops for other groups to refer to, expanding its relevance beyond the event itself.